HomeNewsChildcare, powerful decent men and quotas in film and television

Exactly why gender equality is so important. And how the campaign still illuminates our industry today.

[This article first appeared on ScreenHub. It has been republished here with the permission of the Author.]

MEDIA investor and shareholder Deanne Weir last week said it was “negligence” if managers within film and television companies did not utilize the best talent. She was specifically referring to the need for less career disruption due to raising children, a key reason women were not excelling in – or staying in – corporate environments.

“Funnily enough, most women are not getting pregnant by way of immaculate conception,” she said with a twinkle in her eye, noting that childcare should be a gender-neutral issue.

She emphasized the benefits of companies embracing the different styles of thinking, management and problem solving that characterized men and women:

“Gender diversity is a good thing. It helps make better decisions … It is just too easy for business to do things the way they always have.”

The acting chair of Screen Australia, media entrepreneur, company director, philanthropist and former senior executive of subscription TV outfit AUSTAR, was speaking at a discussion titled Women, Influence, Leadership in the Film and Television Industry, held last week in Sydney under the auspices of the Natalie Miller Fellowship. About 200 senior members of the industry attended at the NSW Trade and Investment Centre.

The other presenters were: producer and company director at Porchlight Films, Liz Watts; Head of Development at Hopscotch Features and Acquisitions Executive at Entertainment One, Rachel Okine: and Sex Discrimination Commissioner Elizabeth Broderick.

Women still handle 70% of primary childcare – and 70% of care of parents, parents-in-law, the elderly and the frail – one reason the retirement income gap favours men by 50%, said Broderick. Another reason is that women earn 83 cents in the dollar compared to men for work of equal or comparable value.

While many in the audience also raised childcare – and making costs part of production budgets – it was just one aspect of a very broad discussion that encompassed the slippery issue of the depiction of women on screen, the introduction of quotas on and off camera, and the need to include men in the push for gender equality.

More than five years ago Broderick asked dozens of chief executives and chairs from Australia’s biggest and most influential corporations and institutions to get aboard the Australian Human Rights Commission’s Male Champions of Change leadership initiative. She knew she needed “powerful decent men” to intervene: how illogical to think women could create change precisely because of their lack of power. 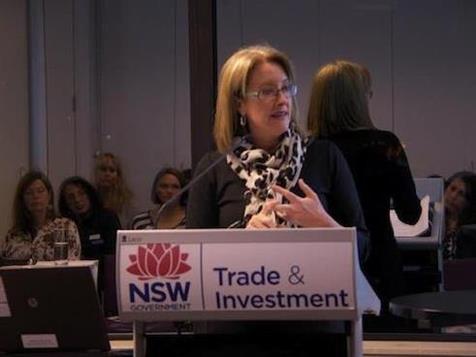 A picture of patience and lucidity – Sex Discrimination Commissioner Elizabeth Broderick in action at the NMF’s Women, Influence, Leadership in the Film and Television Industry Q&A event in Sydney on July 10th.

The first person she called was Glen Boreham, then CEO of IBM and chair of Screen Australia. A key reason he didn’t hesitate to sign on, she said, was because he knew his daughter would never have the same opportunities as her twin brother unless there was change. Making things personal also helped when Broderick lead the review into the treatment of women in the Australian Defence Force.

Broderick’s enthusiasm for gender equality was inspiring even if her statistics and general observations were sobering. At 51% of the population, women are the majority, not a minority, she kept reminding us.

“Formal and overt” discrimination has been removed, she said, but “gender asbestos” has not: “It’s the attitudes, beliefs and unconscious bias that is built into the walls, floors, ceilings, practices, and structures of organisations, and it’s invisible and therefore more difficult to change,” she said. The deeply held set of beliefs we all have that make us think the imbalance between men and women is a given, also “clashes with the case for change”.

Liz Watts is at the top of her game as a producer and by spelling out her career path and examples of what she wrestles with, she underlined the complexity of the gender equality terrain. When “the boys’ club” made her feel excluded, she practises “wilful positivity” by telling herself “I will not let this situation get the better of me”. Sometimes that earned her the intimidating label.

She prompted laughter when she talked of encountering men who expected her to be secretary/assistant/mother or girlfriend, rather than their equal; and won admiration when she spelled out how Porchlight tried to address the general “gross” under-representation of women on and behind the screen.

Weir had earlier said that of all the feature directors, producers and  writers who were active – ie they had at least one credit on a project part funded by Screen Australia in the last five years – 18%, 34% and 25% respectively were women. For documentary the figures were 26%, 45% and 37%.

The presence, nature and impact of female characters on screen, and the relationship between them and the proportion of women behind the camera, is not so easy to convert into statistics.

“When even one woman writer works on a film, there is a 10.4% difference in screen time for female characters,” Watts said, quoting the Geena Davis Institute website. She also asked whether it was cliché or truth that female audiences want emotional connection whereas men need a logical/linear pathway. If it is truth, to what extent has the ‘male’ value system fundamentally shaped genre, content, criticism and so on? (And, I want to ask, circled back into the psyche of women.)

Perhaps quotas need to be introduced, she said, drawing attention to the British Film Institute’s new rules on diversity.

“We must have creative determinism by women in all levels of the industry,” Watts said. “That’s when we would find a true gender variety – as opposed to a gender singularity – in mainstream media and this industry.”

Rachel Okine was the main driver of the event – although NixCo also deserves considerable credit. She said it was hard to gauge whether women would be depicted differently if producers didn’t pitch to men more often than not.

She raised the five-point gender equality charter that has recently been adopted by some French companies  and, having been to Harvard as the first Natalie Miller Fellowship recipient, she sang the praises of executive training and mentoring. A favourite piece of advice is: “Every time you move up the ladder you make sure you are pulling someone up behind you”.

She also suggested developing a “really sexy brand” for Australian women filmmakers: “We could build on each others’ successes off the back of Sophie Hyde winning best director at Sundance (for 52 Tuesdays), for example, and The Babadook selling to multiple European territories.”

She used the example of Blue-Tongue Films: harnessing individual success to feed into an organisation that becomes larger than the sum of its parts.

Her final call to action went like this: “We’re in a unique position in that we work in the arts and in storytelling, have the power to shape the stories that Australians see and the power to reinvent archetypes and re-present a different sort of character and culture on our screens. So let’s use it.”

There were 400 women and 50 men invited to the event. Half the women showed up and only three men (well, 3.5 if you count the producer who promptly buggered off, apparently aghast.) It makes you wonder whether a film and television version of Male Champions of Change could be adopted, doesn’t it? But maybe they were looking after their children.  Mmmm. I doubt it.

Sandy George presents films on SBS One on Saturday nights, writes extensively about Australian film for SBS.com.au/movies, and is Australian correspondent for Screen International/Screendaily.com. (She moderated the event and would like to assure attendees that her dad was a top bloke. Yes, his will did stipulate that her three brothers got double what she and her sister did, but it was a generational thing and he was a farmer who didn’t have the benefit of an education.)