Report on my selection as the 2015 NMF recipient 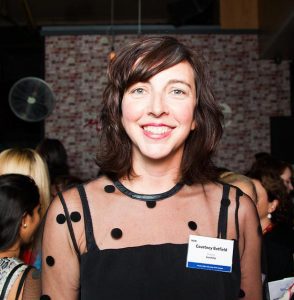 My year as the 2015 Natalie Miller Fellow has been one of incredible growth both professionally and personally.

In a business sense it has opened so many doors. I continue to be contacted by industry colleagues, both women and men, to not only to congratulate but also to engage and collaborate. In turn, it has allowed me to reach out to business leaders for guidance and partnership.

The alchemic timing of receiving the Fellowship whilst in the start up phase of my new business, Goodship, provided incredible momentum.

My visit to the USA and Canada in April 2016 to meet with leading film and social impact practitioners and to attend the Tribeca Film Festival and the Hot Docs Film Festival Forum was immersive, reflective and inspiring. It cemented some of my new business’ objectives, helped articulate others and exposed me to female business leaders and creatives achieving incredible things.

In a personal sense it has been a period of incredible highs and peaks of confidence, but also of self-doubt, often questioning why I have chosen to take on the considerable challenge of starting my own business at one of the most intense chapters of my life parenting twin toddlers. But the reality is I had to, because there are limited options on the table for women who want, and need, to parent and work.

Applying for the Fellowship made me face these realities; winning the Fellowship made me punch through the sleep deprivation to keep going; and being a Fellow has alleviated the isolation that I, and I know many other women, feel in this period of their career. It provided the sisterhood I never knew I needed nor was there.

So here is my Fellowship year in a little more detail:

The significance of the presentation of my Fellowship taking place in the opening session of the Australian Movie Convention before the industry’s top executives was not lost on me. It demonstrated the acceptance and enthusiasm the industry has for important conversations about encouraging a new generation of women to become leaders across all areas of the industry.

In early 2016 I attended the Tribeca Film Festival and on my first day I attended the Daring Women in Film Summit and it couldn’t have gotten off to a better start! It featured panels with:

“Influential women in arts and technology who have risen to the top of their respective fields by eschewing traditional career trajectories in creating their own paths. Not only have these women broken ceilings to succeed for themselves, but most importantly they have created opportunities for other women along the way through direct support and mentorship, forging job opportunities for others and creating content where women can see themselves and the possibilities of what they themselves could become.”

Whilst in NYC I met with leading practitioners in the film impact space including:

Branded Docs Workshop with Brian Newman, Founder of production, distribution and marketing company Sub-Genre discussing how working with brands can increase the impact and reach of their films.

Online Channel Surfing Forum featuring leading digital network executives from The Guardian Documentaries, New York Times Op-Docs and VICE Channel to discuss the programs that make their brand, the viewers they target and the deals they make.

Back in Australia over the course of the year I had the privilege of meeting with inspiring female business leaders including Deanne Weir – Foxtel, Jenni Tosi – Film Victoria, Fiona Cameron – Screen Australia, Jane Sloane – Global Fund for Women, Julie Reilly – Australian Women Donors Network and Melissa Silverstein – Women and Hollywood.

I will continue pursuing mentorship programs with female business leaders aligned with the philanthropic, social enterprise, branding and/or corporate sectors to glean business and leadership skills.

In July 2016 Goodship was announced as one of 13 industry recipients of the inaugural Screen Australian Gender Matters Brilliant Careers program. This allowed Goodship to appoint a Brand Integration Specialist to marry brands and corporates with socially conscious screen content. Being a part-time senior position, we were able to employ an incredibly experienced working mother, very much in line with our philosophy of forging job opportunities and workplace flexibility for women.

At the time Screen Australia Chief Operating Officer, Fiona Cameron announced. “Through the Gender Matters – Brilliant Careers program, Screen Australia is providing funds for enterprising companies to bring through the ranks talented women. Only when more talented women are employed in senior management will gender equality ever be realised and without programs that recognise this fact gender pay equality will continue to be out of reach. The Goodship Agency, whose key decision making roles are all held by women, takes an innovative approach to partnerships and programs to get Australian screen content financed and delivered. Screen Australia is proud to be supporting this initiative and we look forward to seeing what can be achieved when great ideas and expertise come together.”

In mid 2016 I was accepted into the BT Social Entrepreneurs Accelerator Program run by the School For Social Entrepreneurs (SSE) after a competitive application process. The incubator program was ideated to transform Australia’s next group of change-making social enterprises. Unfortunately just prior to the program starting the SSE closed its Australian operation, although there are still opportunities to connect with some of the companies that were involved.

In September 2015 I was invited to present an Impact Producing, Marketing and Distribution Masterclass at the NZ Big Screen Symposium – the annual gathering of the NZ film industry. My presentation offered insights and case studies on building strategic philanthropic and brand partnerships for films, across both documentary and drama.

In summary, my time as the 2015 Natalie Miller Fellow saw me journey from fledgling entrepreneur, to meeting with leading film executives in Manhattan, to teaching a masterclass at an international film symposium – things I never thought I could achieve. The opportunities the Fellowship will continue to afford me in my professional ventures are boundless and I look forward to continue promoting the NMF however possible and meeting with future NMF Fellows.

Thank you to Natalie Miller, Sue Maslin, Chrissy Thomson, the NMF selection panel and the NMF Committee for allowing me this incredible experience.