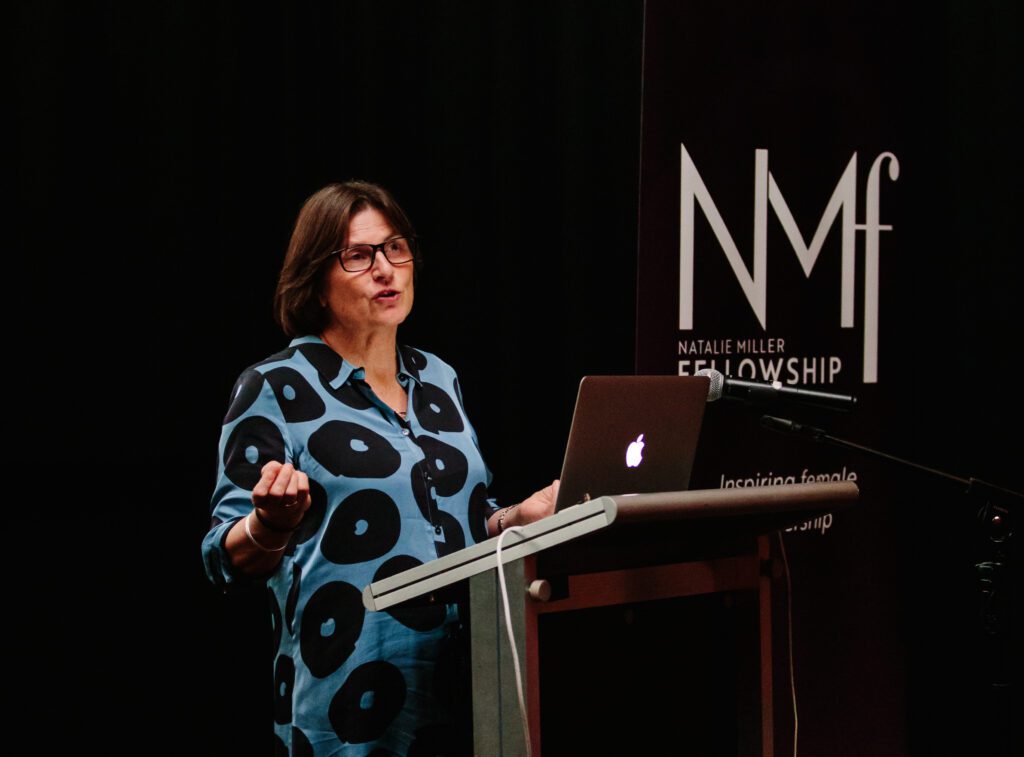 On 15 May, Sue Maslin AO, President of the Natalie Miller Fellowship (NMF), will step down from her leadership position after more than 10 years serving on the Management Committee. Her successor to be announced in due course.

Maslin AO is one of Australia’s most successful screen producers with a track record of award-winning feature and documentary films including critically acclaimed hits The Dressmaker, Japanese Story and most recently Brazen Hussies which she Executive Produced and distributed through her company, Film Art Media. Her mentoring, advocacy and outstanding 35-year contribution to the Australian screen industry has been widely recognised. She was appointed as an Officer (AO) of the Order of Australia for distinguished service to the Australian film industry as a producer in 2019 and received the GCFF Chauvel Award in 2020.

Maslin first joined the then informal group of women in 2010 and together they [Chrissy Thomson, Annette Blonski, Jan Epstein, Jennifer Sabine, Zelda Rosenbaum and Heather Scott] decided to raise funding towards an annual $10,000 Fellowship named in honour of Natalie Miller AO, awarded to aspirational women to pursue professional leadership.

Over the course of her tenure as President and founding member of NMF, Maslin built relationships with the screen industry that would ultimately lead to recurring donations from many individuals, organisations, and companies to enable the annual Fellowship to flourish to $20,000.

“I have now overseen the awarding of nine Fellowships since 2011 and am aware of the impact that it has had not only on the career journeys of the recipients, but all women who applied and went through a process of considering their career trajectory in a new way,” she said. “The requirement to seek letters of support from industry mentors meant that women were having serious conversations about their leadership ambitions with employers and industry leaders, and this alone has led to career advancement for many – something I am very proud of.

She continued, “the Fellowship itself applies to women from any sector of the screen industry and I am pleased that it has been awarded to women from distribution, production, marketing, post-facilities and exhibition. A particular focus for me has been ensuring that women from the indigenous community apply to the Fellowship and we awarded our first Fellowship to an indigenous woman, Pauline Clague, in 2019.”

Maslin recalled a particular highlight was the successful NMF Brilliant Careers Program, “this was the first such program to offer women from around Australia an opportunity to build skills that specifically addressed leadership and was so ably managed by NMF Vice-President, Sandra Sdraulig AM and her team in 2017 and 2019.”

Over the years, the Committee has grown and renewed, and Maslin firmly believes that the success of the Fellowship is due to the incredible women behind it who remain committed to ensuring women have a seat at the table shaping the future of the Australian screen industry.

Maslin said she decided to step down as President knowing that the organisation will be offering its 10th annual Fellowship this year, has a clear strategic plan in place, an energetic committee and firm industry support to ensure that it will run for many years to come.

“I have been a direct beneficiary of the support of many in the industry who have enabled my own career to develop over the past 10 years and I am hugely grateful for that support. It is largely the result of my work with the NMF that I no longer consider career development as a haphazard journey of success and failure, but as something that can be developed strategically and mindfully with enough confidence, skills and support. The NMF has afforded this same discovery to many other women and I look forward to seeing that continue for many years to come.”