HomeEventsInvitation to The Beguiled Fundraiser Screening

invites you to an exclusive fundraiser preview screening of 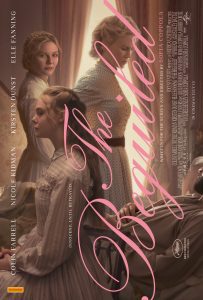 The Beguiled is seductive drama that has critics buzzing, and won Sofia Coppola the Best Director award at this year’s Cannes Film Festival. She is only the second woman to do so in the festival’s history, after Soviet filmmaker Yuliya Solntseva won for The Chronicle of Flaming Years (1961).

The story unfolds during the Civil War, at a Southern girls’ boarding school. Its sheltered young women encounter an injured enemy soldier. As they provide refuge and tend to his wounds, the house is taken over with sexual tension and dangerous rivalries, and taboos are broken in an unexpected turn of events.

The film features a strong ensemble cast including Australians Nicole Kidman and Angourie Rice, along with Kirsten Dunst, Elle Fanning and Colin Farrell.

All proceeds will go to the Natalie Miller Fellowship
– supporting the professional leadership of women in the screen industry.