Kristy Matheson, senior film programmer at the Australian Centre for the Moving Image, has been awarded the 2017 Natalie Miller Fellowship today at the Australian International Movie Convention on the Gold Coast. 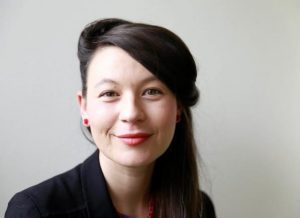 Established in 2011, the Fellowship awards a grant to a woman in the Australian screen industry who has demonstrated initiative, entrepreneurship and excellence. The Natalie Miller Fellowship (NMF) annual grant of up to $20,000 is designed to inspire the next generation of female leaders to achieve outstanding success at the top of their fields.

Kristy Matheson has worked within independent film distribution and held positions at the Brisbane International Film Festival and the Sydney Film Festival. She has published in Senses of Cinema, served on film festival juries, pre-selection committees and industry peer assessment panels. Her current role is the Senior Film Programmer at the Australian Centre for the Moving Image (ACMI) in Melbourne where she programs contemporary films and retrospectives at the popular museum.

Upon receiving the grant Matheson said, “In just a few short years, this fellowship has become an industry game-changer, with previous recipients actively shaping the future of our industry and giving voice to women at the top leadership level. I am deeply honoured to join this impressive list of film professionals and look forward to embarking on my research proposal which will highlight the innovations of our local industry and reinvigorate a dialogue on the challenges and opportunities facing cinema exhibition.”

Natalie Miller AO said, “The Fellowship had very strong applicants, Kristy Matheson stood out as someone who will be a future leader in our industry. She has experience in exhibition, distribution and marketing in both the commercial world as well as currently at ACMI. Her research project leads her to think globally and should bring findings to benefit the whole film industry as well as audiences.  She has an engaging personality which will make her a very worthy ambassador for the Natalie Miller Fellowship.”